“You can’t have it, Adi. You don’t play with something that has life,” I said.
He pouted his lips and stormed out of the house; what a way to accept “defeat.”

The following day, he was asking for money to buy the colored chicks from the vendor. I repeated my position about “no playing with something that has life” but my effort was in vain because his father backed him up! So after a few minutes, my little boy had this uncolored chick inside a small cage. I asked him to take care of it and Adi seemed genuinely interested on his new pet.

The chick seemed to be uncomfortable being confined in a small cage so I transferred it to our laundry basket and gave it some food and water. It accidentally splashed itself on the small water container so the poor chick was trembling. My daughter wrapped it on a piece of old clothes to make it warm. Soon later, the chick was lively again, eating and drinking. Adi lost interest on the chick except for some occasional “visits.” My daughter brought the chick to her room on Sunday night to protect it from predators.

Monday morning, I took the chick down and asked my husband to borrow the empty cage from our neighbor. The chick seemed to grow bigger and happier. I checked the chick when I arrived from work Monday night. We had our dinner and when I checked on it after dinner, it was gone! There were two cats sitting beside the cage and one of them SURELY ate our poor chick!

I called Adi to tell him what happened. He was briefly mad at the cat but when he went inside the house and continued the movie that he was watching, he forgot about his pet chick!

Parents, it’s okay to buy our kids a pet if they are matured enough to take care of it.

It’s okay to buy our kids a pet if we have the space and capability to nurture it.

It’s okay to buy our kids a pet if the pet is old enough to be taken cared of by a human being.

Parents, we don’t need to patronize an industry selling young pets for a profit. We know that the best care these pets can receive will still come from their mother.

We don’t need to patronize an industry that decreases the value of an animal to a commodity.

Responsible pet ownership is what we should teach our children. 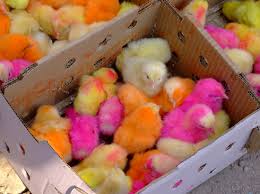