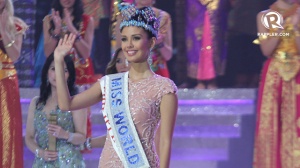 Photo courtesy of Rappler.
She’s every inch a beauty queen.

It was 2004 when I first saw Megan Young on TV. She was a contestant of a talent reality search in GMA 7 (Starstruck). An officemate of mine in Olongapo City knew my fascination with showbiz and that was probably the reason why she informed me about her daughter’s not successful audition for Starstruck at SM Pampanga. She asked me to guess who was with her daughter during the audition. I thought that it was somebody from the office. She corrected me by saying that it was Megan Young who was with her daughter on that challenging day.

Since then, the subject of our discussion was about her beautiful daughters’ interest in joining beauty pageants and showbiz and about Megan Young’s chance at the talent reality search contest. I would often joke about telling her to tell her daughter to tell Megan that I’m her fan.

Winning the 1st Filipina Miss World last Saturday, Megan gave me the goosebumps! How many times have we expected to bring home the crown since the times of Gloria Diaz, Margie Moran, Melanie Marquez, Precious Lara Quigaman and just recently, Mutya Datul? With Megan, we knew from the start that she was an early favorite and perhaps, expecting her to be on the top 5 would not give us false hopes. But Megan won and I’m sure that her former neighbors and classmates in Olongapo City were very happy and proud of her. She gave them the pride and happiness two weeks after Olongapo suffered from flooding.

Known for her sincerity, Megan thanked her fellow Filipinos in Tagalog right after being crowned. Myleen Klaas, who’s mother is a Filipina, looked genuinely happy for Megan. Truly, the Filipino pride is evident wherever a person goes and whatever his/her status in life is.

In these times of the pork barrel scam,MNLF attack in Zamboanga and natural calamities, Megan gave us a breathe of fresh air. Thank you, Megan Young for the 1st blue crown!